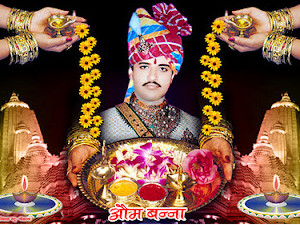 It’s not uncommon to find people worshiping God, animals, birds, ascetic or even, tree in our incredible country, which is full of surprises and miracles. But, today I am going to discuss about a place where a man is worshiped along with his bullet after his death. People come to this place to make votive offerings with a hope that he will fulfill their wishes and protect them as well, especially from road accidents. Almost 29 years ago, this miraculous motorcycle puzzled people and police officers of that area with its wonders and that’s the only reason that every new police officer visits this place to pay his homage before joining duty and taking charge of the area.

I know your curiosity is at its peak, and you cannot wait to know the name of the place. Well, I too don’t want to test your patience. I am talking about OM Banna, which has become a popular place now. You will find a board stated ‘Danger Zone’ of Rohitt station placed on Jodhour – Ahmadabad national highly around 20 km before Pali district if you’re going Pali from Jodhpur. When you move a bit ahead, you will see 30-40 shops adorned with the goods used for prayers and additionally, you will find a small platform built under a tree with a big image placed over it and surrounded with the great crowd. Just nearby this platform, you will figure out a motorcycle decorated with garlands and flowers. Yes, this is the place i am going to introduce to all my readers today- Om Banna place.

Om Banna aka Om Singh Rathore was son of Thakur Jog Singh Rathore, Chowtila Village, Pali City. Om Banna died in a road accident while crossing the same place in1988 on his Bullet. According to the localities of that area, a lot of people had lost their lives in road accidents in the past also on the same place OM Banna met the accident and died. It is still a mystery why road accidents were used to happen on that particular area and nearby the tree only? After Om Banna’s on-spot death, Police took the motorcycle under their custody for legal crackdowns, but next-day morning, they found the motorcycle is not in the police station and after an immense search; they located the motorcycle standing on the same accident spot. Again, police officers brought the motorcycle to station and the same thing happened for many days.

Finally, Police and Om Banna’s father took it as a wish of Om Banna and placed the motorcycle on the spot where he died under the shelter of the tree. Many people have seen Om Singh saving people from accidents in nights after placing his bike on his death-spot. He either stops the vehicles forcefully or reduces the speed in order to avoid any life-taking accident. It is again a miracle that after that, there is not a single case of the road accident happened in that area, it’s true.

The devotion and faith of the local people increased after finding the soul of Om banna protecting them and any traveler crossing the place from an accident. It is the result of their devotion that you will find this place crowded with devotees, and people move ahead only after paying the homage to Om Banna. People come from the different corners of the country to see and make votive offerings to the miraculous motorcycle.

Around 2 year ago, I got the information through a national channel about this place while i was going to Jodhpur from Ahmadabad and I got an opportunity to visit Om Banna place this time, so I thought to inform my readers about this miraculous place.