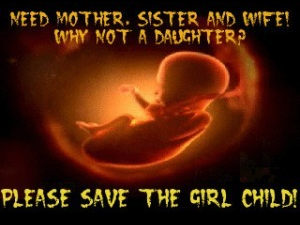 Declining sex ratio is an issue of serious concern in India. Of course! It should be; because when it comes to our human society, everything depends on the both sexes equally. No matter what we do for the sake of our relationships but it is a reality that a family is completely dependent on adjustment between a man and woman and they are the foundation of our country as well.

These days, we are blaming æfemale foeticideÆ for the decline in the sex ratio in our country but it is an undeniable truth that this merciless act is only possible with the consent of father, mother, and grandparents. Yes! It is impossible to kill the unborn female child without the consent of her mother. May be some feminist writers put an objection for this but they can’t change the fact because we can’t ignore the evil practices, customs, superstitions and hipocricy of our society wherein both men and women give an equal contribution.

Recently, Indian actor Aamir Khan has raised the issue of æfemale foeticideÆ in the very first episode his debut Indian TV Talk Show – “Satyamev Jayate” and we must appreciate his sincere efforts to bring the reality to the forefront. However, at the same time, we should keep in mind that æfemale foeticideÆ is not an issue in real sense. Actually, it is the result of dowry system and many other evil social practices of our society and we can’t stop this inhuman act just by raising the slogans like ōSave the Girl Child” or “Stop Female Foeticide”. For this, we need to change the mentality that is responsible for the “female foeticide”. We must stop the dowry system of our society and we need to avoid the misplaced archaic nonsense of girls being the ‘honor’ of family. Unfortunately, this is a tradition in our Indian culture, but some people take it seriously enough to make murderous acts for the sake of ‘honor’ that is driven by the hugely inflatable male chauvinist egos. We must remember that this is our society that shows pity on the father of 3 or 4 girls and of course, no father wants himself to be considered as a subject of pity. Hence, until we change our mentality, stop the dowry system and avoid spending extravagantly in the marriages, we won’t be able to stop “female foeticide”.

11 thoughts on “Female Foeticide In India ¢ Can We Really Stop It?”