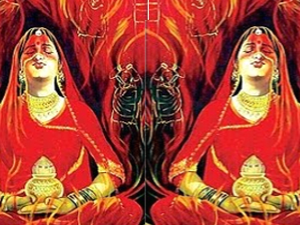 Every community of the world has struggled to secure their independence and prosperity and have made every possible sacrifice. In fact wars between humanity also took place with the suspect that someone will snatch their rights or at times to make it modern practical and ahead of others. Not only this, with this environment we would need to kick start a new war against terrorism for our independence and safety and keep struggling till we do not succeed.
In the history of war tradition of Rajasthan, Johar and Shaka has a special space where inspite dependency on others people prefer to welcome death happily when they could not live further in their surveillance. Then comes the stage of JOHARS and SHAKAS.

JOHARS: In order to to save from after effects of wars and to save themselves from the hands of beasts and maintain dignity, females of braves used to remember their regional gods and after taking tulsi with holiwater of the Ganga used to offer themselves in pyre. By their this attitude they used to assure their brave mens that the they wll not let the enemies conquer them and let them destroy womenÆs pride. Johar tradition used to give a sense of satisfaction to those who used to handle the war ground that any adverse aspect of wars can not touch their dear ones. This deadly act of sacrificing their lives became popular with the name of Johar. The maximum number of Johars and Shakas happened in ChittorgarhÆs Fort where queen Padmini of chittor burnt herself along with 16000 other brave women in August, 1303. these warriors used to see their women and other dear ones burning themselves, they used to wear saffron clothes and attack enemy forces in such a way that either they will win and destroy the enemy front or will; kill themselves then and there. When they decided to devote themselves for their state they either made their state free or lost their lives in a adorable manner which s known to all as SHAKAS.Ā

One thought on “Johar & Shaka : To Welcome Death Happily”