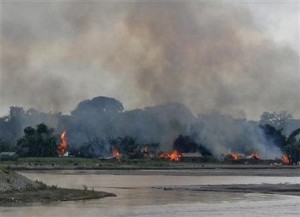 India’s ostentatious progress on the economic front, although highly lopsided, is in sharp contrast to a corresponding decadence in human values, as evidenced by happenings around the country. One is compelled to wonder whether human life, and humanity itself, had ever been relegated to such insignificance as they are in India today.

A child dies in a government hospital in Jalandhar because her parents could not pay 200 rupees as bribe for keeping the baby in the incubator. Another child dies in a hospital in Chandigarh as the doctors procrastinated in attending to her injured leg. In both these cases, the hospital authorities were totally unrepentant about their crimes, and instead tried to treat the cases as routine incidents. In the North-East, more than 50 people have lost their lives and lakhs lost their homes in ethnic violence, a catastrophe that could easily have been prevented had the government reacted in time. Incidents such as these are on the rise in Indian society. Respect for human life and dignity seems to have deteriorated with time, and the authorities responsible for maintaining peace and protecting human life do not appear to be affected in the least by the death of innocent people. Politics in the country has always been dirty and ruthless, but today it has degenerated into something akin to pure evil, as it feeds on disunity and strife in society. All politicians are united in their attitude towards human life in India. So long as the death of people do not affect their political standing, or threaten to erode their vote banks, they are least concerned who or how many people die. Our elected representatives look upon the citizens of the country, especially the poorer and more underprivileged lot, as just a percentage of the total population of the country, rather than as human beings of different individualities, with their own sentiments, troubles and sufferings. At a time when the western world has woken up to the value of each human life, however insignificant his or her standing in society, our leaders consider people living in backward areas to be absolutely dispensable. So, it would be wrong to expect our politicians to be sensitive about human emotions, but the biggest and most ominous aspect of the prevailing situation is that this attitude of apathy and insensitivity seems to be gradually percolating down and spreading into larger sections of Indian society.

Today, stories of callousness towards human life and dignity abound in our society, and, other than the politicians, the roles of the villains are also being played by non-political persons from our society such as doctors, police officers, public administrators and even members of the laity. There is a feeling that people in India today do not empathize with the joys and sorrows of their fellow beings like they used to before; that they are falling prey to the divisive policies of our politicians; that in the race to achieve greater material prosperity, we are ignoring the pains and sufferings of our own brethren.

Since the birth of the Indus Valley civilization, India has been home to a culture of amity and brotherhood. India’s culture evolved from its villages where society has always been one close-knit brotherhood. With the onset of urbanization and intra-state migration, along with a continual pursuit of material pleasures, the Indian mind seems to be losing its human touch. The rise of the politics of disintegration and division on the basis of caste, class, region and creed has further exacerbated the state of affairs. Are we going to let the great Indian societal system, which has had no parallel in terms of respect for human values anywhere in the world, just crumble under the weight of petty evils and protagonists of evil while we stand and watch? Should we let ourselves be deluded by the glitter generated by the progress of a few while the majority still wallows in misery? A country deserves the kind of leaders it gets. So, we need to look inwards and cure our society of these afflictions. Only then can we have the sense to select the right kind of people to lead our nation.

3 thoughts on “Depreciation of Humanity”