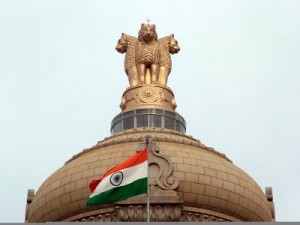 It is often said that when it rains, it pours. When bad times come, they come in a cascade. The great Indian Democracy is passing through the throes of one of its worst phases of political leadership. We have a government which is not only apathetic to the misery of the common man, but is also one that is hell bent on plundering the country. We are faced with an economy facing one of the worst crisis in recent times, further exacerbated by an administration corrupt to the core. The elected representatives of the people have forgotten all their lofty promises of an idyllic India, and the country is being dealt the double blow of ineptitude and corruption.

At a time when the ebullience of the great Indian Economic resurgence is starting to wane, the government can do little more than blame it all on “global issues”. Scams worth thousands of crores are getting unearthed every day but the powers-that-be chose to pretend that everything is hunky-dory. The most ominous sign is that the government is not only blind to the rising cases of corruption, but it seems unwilling to create laws to prevent or cure this malaise. Rather, it is seen to be the biggest enemy of the crusaders against corruption. The leaders at the helm of affairs in the country is conveying the impression that plundering and pillaging public wealth has almost become a routine affair, and even the masses seem to be resigned to it. The President of the country, incidentally and unfortunately, has also turned out to be the worst ever, completely out of sync with the voice of the man on the street.

Mrs Pratibha Patil has set new benchmarks in profligacy, frittering government money at will on frequent overseas trips with her kith and kin. As the President of a country in which more than a third of the population struggles to cobble up two square meals a day, Mrs Pratibha Patil spent a record 200 crore rupees in a mind boggling 36 overseas trips during her tenure as President, and she continues to be defiant about it to this day. Mrs Pratibha Patil was well aware that nobody could question her overseas trips or ask of her an account of her expenses, which included stays in the most expensive hotels with her relatives and shopping lists containing the most expensive gifts, simply because she was the President. The people had no right to question her because she was not elected by the people. The political leadership will not question her because she was chosen for the post of President by the elected politicians, who want her to enjoy herself to the limit, and in the course stay away from active involvement in government affairs.

So, the country is poorer by about 200 crore rupees because our politicians wanted Pratibha Patil to be our President. The privileges of the Presidential office are in keeping with the highest post of the country. However, such privileges, in the hands of unscrupulous politicians, can result in pure disaster. It has become more a rule than an exception to nominate such a person for the highest post of the nation, who is willing to subvert oneself to the whims and fancies of the ruling party.

Presidents like A P J Abdul Kalam, who is liked by a majority of Indian citizens finds no favor with the political class because he is not ready to play the puppet to the ruling party. Mrs Pratibha Patil enacted that role of the puppet to perfection, and the country is poorer by a few hundred crores as a consequence. Today, we see Pranab Mukherjee, a failed Finance Minister, who has managed, through his ineptitude, to break India’s ascent in the world economic scene, being eased into the comfort of Rashtrapati Bhavan. Only time will tell whether Mukherjee will redeem his name as President or further defame himself by following in the unenviable footsteps of his profligate and insensitive predecessor. God save our Democracy.