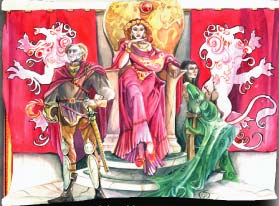 India has a long history of suffering at the hands of its emperors, kings and queens. Barring the brief sojourns of great rulers such as Chandragupta Vikramaditya, Ashoka, Kanishka, Chandragupta Maurya, Akbar etc, we have had rulers who did nothing but crush the liberties, privileges and rights of the laity. Today, after 65 years of living under the protective shield of a democratic constitution, we still find ourselves vulnerable to the whims and fancies of another form of royalty, which has slowly risen to absolute power under the cover of democracy. Today, we are actually in a kingdom ruled by a queen, who is no less powerful than our erstwhile emperors.

The hold of the Gandhi Dynasty over the Indian National Congress party is perhaps one of modern India’s biggest mysteries. India is today a 65-year old democracy, and is moving farther and farther from the days of despotic Kings and Emperors who enslaved their subjects and followers. Yet, the culture prevailing in the biggest political party of democratic India is strongly reminiscent of ancient times, when the King was considered to have divine sanction to rule over his land, and fulfillment of his every wish was deemed the sole purpose of existence of his subjects. This is amply reflected in the blind reverence shown by members of India’s oldest political party, both old and young, for any member of this great dynasty, in that the mother Gandhi is virtually the Queen Goddess to her partymen, and her son and daughter the honorable Prince and Princess. The Crown Prince is being begged day in and day out by party men twice his age and experience to come and join the government and chose whatever position he wants to take, implying that even the Prime Minister is ready to make way for him if he so desires! This unabashed servility is simply inexplicable. It has been on display in even greater fervor ever since the divinity of the ‘Queen’ has been blasphemised by one Mr Arvind Kejriwal, who has had the impudence to question the financial dealings of a man who is none other than the son-in-law of Her Majesty.

Notwithstanding the fact that the person accused has no part in either the party or the government, and should purely have been seen as a personal affair of the party president, the Queen did not even have to raise a finger or utter a word of protest. Her subjects were already up in arms against the upstart, competing with each other to please Her Majesty by their obsequiousness, and their blind condemnation of Kejriwal. One minister, who is otherwise a picture of self-esteem and dignity, even went to the extent of declaring in front of the media that he was ready to die for her, sounding almost as if he is sure to attain salvation in doing so. The Congress party had seen many non-Gandhi leaders such as Sitaram Kesri and Narasimha Rao, but the party had a more democratic character under these leaders, in that every decision of the party chief was open to debate, and many a decision had been successfully opposed.

However, the Congress party of today is an agglomeration of political stalwarts who are entranced and spellbound in their reverence for the party chief and her kin. Every member of the famous family has been given the birthright of being the undisputed leader of the party, so much so that even a toddler of the Gandhi family is respected and worshipped as a future leader. Such behavior does raise the question though, as to what it is about the Great Dynasty that has held so many bigwigs of Indian politics in such a spell, and for so long, giving it the kind of status that even some of the famous royalties of prehistoric India did not enjoy. It is also one of the biggest factors undermining our great democracy. It is now imponderable that any of these obsequious servants of the queen can ever even dream of questioning her decisions, leave alone debate them.

The repercussions and consequences of allowing our country to be ruled by a Dynastic lineage, without any regard to the capabilities and credentials of the succeeding wives, sons and grandsons of the elite dynasty, could prove to be detrimental to the progress of the country as a whole. Now that it is apparent that the subjects do not have minds of their own, and even if they do their minds can easily be subverted to conform to the wishes of the High Command, who is no less divine in their eyes than God himself, they can be used by the Queen to do almost anything she pleases, and given the kind of behavior and actions that the political leadership in India gets away with, the prospects that this kind of political leadership entail are indeed scary. By letting an entire group of elected representatives be at the beck and call of a family, and do what the family wishes with the nation and its resources, the very principles of democracy are being blatantly violated. Such absoluteness of power can corrupt the best of individuals, and is a defeat for the system of democracy. It is time the people of India woke up to the realization that a government is elected by the people and for the people, and certainly not for the preservation of royalty in any form at the cost of the larger interests of the nation.