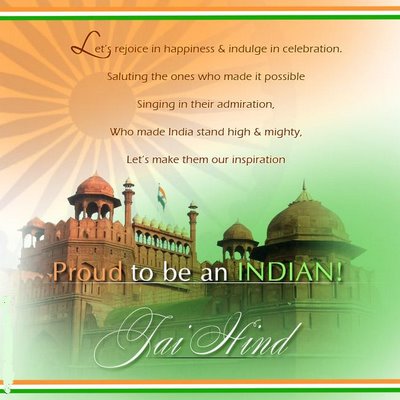 Another anniversary of our nation’s Independence is upon us. As we look back, we find that 65 years have passed us by since we attained freedom from foreign occupation. 65 years have passed since we set about building the India of our dreams, and an exactly equal amount of time has elapsed since the citizens of this country stood together as one for a common cause.

In sacrificing their lives for the cause of the country, the great patriots of the past visualized an India free not just from the British, but also from the shackles of autocracy, from the scourge of social evils, from inequity and inequality, from oppression and suffering, from poverty and malnutrition. It was believed that taking the control of the country into our own hands would be the panacea to all the problems that afflicted our society.

Today, as we stand in attention to chant the national anthem on Independence Day for the 66th time, it is high time we made an assessment of the progress the country has made on various fronts vis-A-vis the visions of our noble forefathers. Have we achieved even half of what we set out to achieve? The answer to that must be an emphatic NO, however blasphemous it may sound. Today we find ourselves rendered helpless by a new form of autocracy, disguised as democracy. The very process of selection of candidates to lead the nation and to address the aspirations, needs and grievances of the common man has been undermined by a ruthless policy of divide and rule exercised with brutal efficacy by some of our own brethren, who have surpassed even the British and other invaders in their divisive policies. 65 years of freedom has fragmented India into hundreds of islands insulated from each other through divisions of caste, class, region, religion and race. The chief practitioners of this pernicious doctrine are the people with the worst criminal records from every section of society. When such individuals, who have long buried their conscience beneath their greed for money and power, are granted the carte blanche to rule the nation, it is but natural for the process of democracy to fall into a state of ruination and abject subversion. As a natural consequence, today in India, money is equated to power and power to privilege. It has become a case of survival of the fittest, and the people who fall in the ‘fittest’ category, comprise less than five percent of the country’s population of 1.2 billion people.

Many may argue that the country is progressing well on the economic front, and India has established itself as one of the world’s most favored investment destinations, so all cannot be bad. Yet, such observers either feign ignorance of the larger picture, or are simply too myopic to take a microscopic view of the state of the laity. Notwithstanding the 7-8 percent growth rate of the economy over the last decade, the number of people living below the poverty line is on the increase. The number of deaths due to starvation and malnutrition refuse to go down. Farmers are compelled to commit suicide in the face of economic adversity. Yet, the rich are growing richer, more through the power of money and the aid of the greedy government machinery than through their own diligence. Unethical behavior has become the hallmark of political one-upmanship, and plundering national wealth and resources has become an unwritten fundamental right of those in power.

Today, the country is in almost the same state as it was during the British rule, inasmuch that the lot of the poor and the underprivileged are still as miserable, the apathy of the rulers towards the public is the same, the plundering of national wealth and public money is at an all-time high, social inequity is more than ever before, and social evils such as untouchability and female foeticide are on the rise.

In the middle of this mess, the voice of the people has been reduced to a whimper. Any sign of public protest is quickly stamped out by use of whatever government machinery available at the disposal of the ruling party. Question is, how can a few unscrupulous individuals from the nether worlds of society subvert the will of a billion well-meaning people? Why do the masses endure the sufferings and injustice heaped upon them by an apathetic and corrupt political leadership time and again? The unity in adversity, which so famously came to the fore in the revolution for Independence, is now nowhere to be seen. We have developed a habit of allowing the rot to proliferate and hoping that others will do the job of repair while we sit and watch. Great martyrs like Mahatma Gandhi, Bhagat Singh, Udham Singh, Chandrasekhar Azad and so many more others sacrificed themselves for a free India of their dreams. However, we the people have not been able to do justice to their legacy thus far. At the root of this failure lies our disunity, which has been cruelly engendered by political forces for their own selfish ends, and is today the biggest nemesis of our societal fabric. Unless we rise together as one against our common enemy, and defeat the forces threatening to snatch our independence and our rights, the nation will never really be truly independent.